New iOS features from Apple tend to be gimmicks, but iOS 10 came with an addition to the Clock app that I’ve enjoying a lot: Apple Bedtime. It’s a pretty simple sleep tracker that gently encourages you to go to bed and wake up at the right times. For me at least, so far it’s been working.

Previously I tried to hack this with calendar reminders, but could never get a working routine together because changing them was so annoying. Bedtime reminds me to go to bed (I usually ignore it for about an hour but concede eventually) and nags me in the morning until I wake up.

It makes a great basic alarm clock too. I’m prone to adjusting my wake up time day-to-day, and now instead of going in and editing an alarm, I just have to drag one end of Bedtime’s big circular slider – a huge improvement.

Now if only it would make me enter the number sequence from Lost before letting me to hit the snooze button. 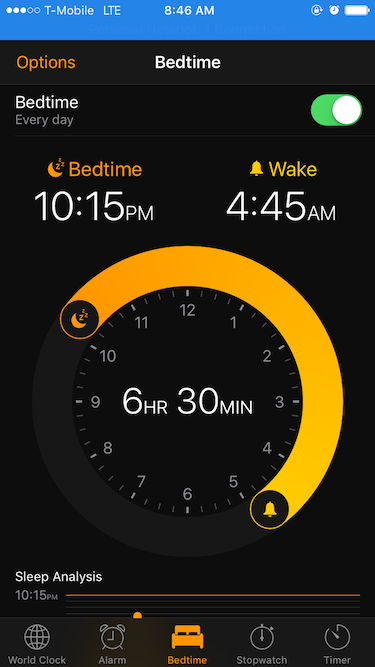