I spent a few hours over the holiday break doing some consolidation of my backups and putting in a few improvements. One item that’s been on the back burner for a while was to do a full dump of everything that I’ve ever stored in Flickr.

About five years back I got more concerned about data portability, so started storing all my photo archives as plain on disk folders instead of in the database of any particular photography software. However, there was a time before that when I was so enthralled with Apple products that I trusted my canonical copies to an Aperture vault. In retrospect, we know how good an idea that was 1, and for me the experience imparted a larger lesson about trusting Apple products with my data.

Luckily, I’d been uploading everything to Flickr the whole time, and have photography on there going back to 2006. The site’s always served me well, but given Yahoo’s recent troubles, it seems wise to hedge my bets and spread some other copies around.

I was initially afraid that I’d have to come up with some kind of scripted solution to get my photos out, and was pleasantly surprised to find out that Flickr’s made image export trivial. Every album has a download arrow that will collect its originals and send them to you bundled up in a zip file. It’s fast and easy; the files are even named according to your album’s title so that it’s very little effort to get them organized after they’re downloaded. 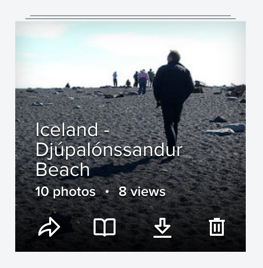 I’ve now got all my photos stored safely into a set of plain folders, and have them syncing bidirectionally between Amazon Cloud Drive and every computer I own with a small daemon script that wraps the magnificently functional rclone utility.

But I’m not done with Flickr either. It’s served me very well for a long time now, and has proven remarkably resilient to the sorts of product defacements that tend to occur when you’re acquired by a much bigger and more bureaucratic company. I’ll probably still be uploading photos until its dying day.