As some officianados may know, in MySQL, changes to a database’s schema or indexes somewhat infamously require a full table lock, a sizable complication that prevents any other operation from running simultaneously. Because any change to a non-trivial table could take minutes or more, in practice those types of changes are avoided.

Companies address the problem in different ways. At iStockphoto, we took the easiest possible route: don’t introduce new indexes or drop old columns. You can imagine how well that worked. GitHub suggests the use of Gh-ost, a rather elaborate tool that copies a table’s schema to a new “ghost” table, makes required schema changes, backfills, and then cuts over after the replacement is ready.

An ex-colleague of mine posted this glib reaction to Gh-ost’s release: 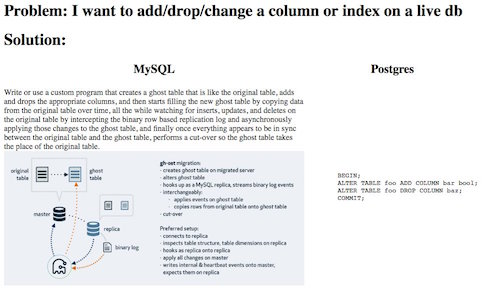 That might look like a simplification, and it is, but not by much. Postgres uses clever mechanics that allow the addition or removal of either a column or an index a non-blocking operation so that a live database can stay online through these changes without interruption 1. There are people out there making tweaks to their Postgres schemas that contain data sets as large as GitHub’s every day without any assistance from specialized tools. I know this because I was one of them.

These impressive features allowing non-blocking operations weren’t always there, but rather added incrementally throughout Postgres’ development by hard-working members of the community. For example, it wasn’t possible to drop an index concurrently in 9.1, but it was by 9.2. The same advancements never happened in MySQL, and complex and operationally expensive systems like Gh-ost are required to compensate.

I understand that sometimes you’re stuck on a legacy system, and sometimes that may require the development and application of solutions that would be inadvisable under normal conditions, but GitHub’s write-up on Gh-ost doesn’t mention anywhere that the project mainly exists to address deficiencies in MySQL, and that there might be a better way if you’re not already locked into a big MySQL cluster. They’ll even go out of their way to champion MySQL over better alternatives despite being seemingly aware how problematic its use can be. Not ackowledging the expensive trade-offs of a MySQL/gh-ost setup strikes me as somewhat amiss given the number of readers (and by extension influence) an article like this one will inevitably have.

Addendum – After a conversation with the original author of the article on gh-ost, I feel bad about the aggressive tone that this article originally conveyed and have tried to correct my hubris by amending it accordingly. Changes are visible in its Git history.

1 There are some limitations to online schema changes in Postgres, most notably that adding a column with a DEFAULT clause or changing a column’s type will require a rewrite. These are described in detail in the Postgres documentation for ALTER TABLE.