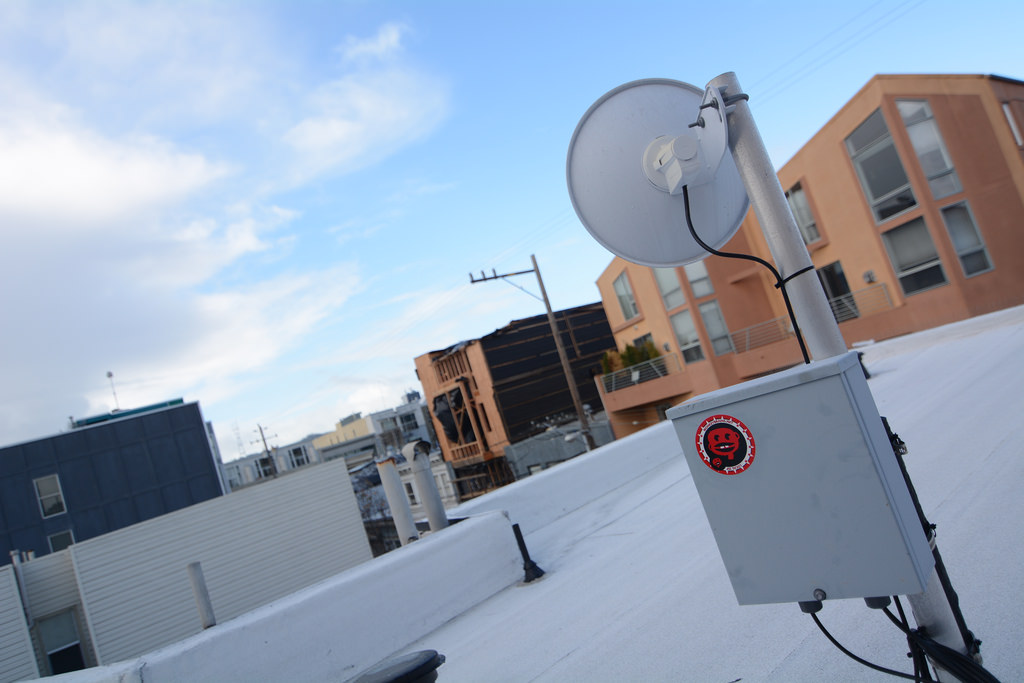 One “worst part” of living in SOMA is the endless construction. Its latest casualty was my Internet connection, a point-to-point radio service depends on an open view between an antenna mounted on my roof and an access point installed a block away. A building across the street had added two more floors and built right into its line-of-sight. Within the span of a week my previously fast Internet had degraded to a 4 mbit/s link most closely related to a dial-up link from the 90s 1. To make matters worse, a new building also recently went up right next door, obscuring at least another 90 degrees and further reducing options for potential new targets for the antenna.

A technician stopped by and proceeded to pace sullenly across the roof as he examined my new circumstances. It was overwhelmingly clear inside the first five seconds that prospects were grim. For the next half-hour he alternated between walking back and forth on the roof checking sight lines, dialing back into headquarters to have energetic conversations about local access points with his colleagues, and staring forlornly at adjacent buildings. By the end of it I had a mental shopping list of alternate service providers prepared and ready to go. As he left, he promised to add a ticket into their system for follow-up, and to do everything in their power for me, a little like a doctor might in confidential tones after telling someone that they were terminally ill.

As I was leaving the house this morning I got a surprising response on my support ticket: they’d been able to use equipment at their office to remotely reconfigure my antenna to a new access point and that my connection was now looking great. A quick check on Speedtest confirmed that it was indeed back up to speeds of almost 65 mbit/s symmetrical 2.

I don’t understand it, but I’m not questioning things too much. MonkeyBrains works in mysterious ways.

On a more serious note, I’ve generally great luck with MonkeyBrains over the year and a half that I’ve been with them 3 and would very much recommend the service. I may be one of the only people in all of North America who gets a 50+ mbit/s connection for $35/month without hidden fees.

3 The only exception being the time they knocked out my Internet for a few days without telling me so that they could install a line for my neighbor.