I learned a few days ago (and about two weeks after the rest of the internet) that John Roderick has been canceled. The fire was sparked by a story about forcing his daughter to learn to open a can of beans: 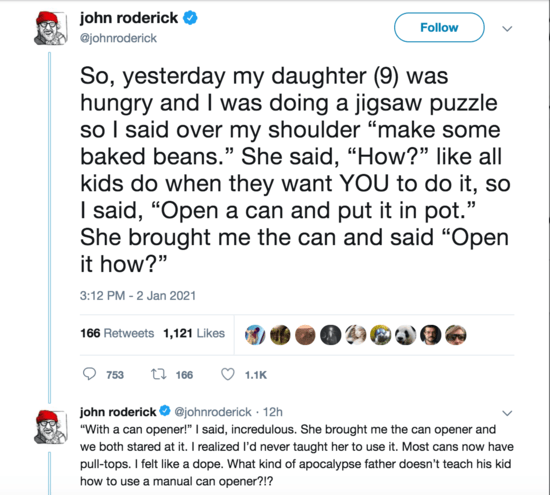 This is a weird one. If you take every word in the story literally, it sounds awful. However, if you allow a smidgeon of context into the room, that’s somewhat counteracted by the fact that creative exaggeration is a core part of Roderick’s entire persona.

I was introduced to Roderick on the Line way back around 2013. The first time I listened, I took every word at face value, and still remember later confronting the friend who’d recommended it as to whether the stories told within were true. They were told with a straight face, but seemed so unlikely as to make a skeptical listener highly dubious.

Quite a few episodes later, I came to realize that this was a hallmark of the entire series. Every one of Roderick’s stories had a kernel of truth at the center – they were all based on real life occurrences – but the details were exaggerated to the rafters. They weren’t quite lies, but they certainly weren’t unequivocally true either. And this is a big part of what makes Roderick’s podcasts interesting to listen to – he’s a great storyteller, and like a lot of other great storytellers, his stories are greatly embellished for dramatic effect. Unfortunately for him, the charm doesn’t translate well to the medium of Twitter, and it took a football to the face to realize it.

We’ll never have a perfect blow-by-blow of the events in #beandad, but if it’s anything like Roderick’s other thousand stories, it was massaged and inflated to grand proportion. His own words on that point:

My story about my daughter and the can of beans was poorly told. I didn’t share how much laughing we were doing, how we had a bowl of pistachios between us all day as we worked on the problem, or that we’d both had a full breakfast together a few hours before. Her mother was in the room with us all day and alternately laughing at us and telling us to be quiet while she worked on her laptop. We all took turns on the jigsaw puzzle.

Cancel culture is insidious, but one can’t help but notice that Roderick was an active participant in the same circles that would eventually destroy him. He’s a great podcaster, but on Twitter was unnecessarily inflammatory in a never ending quest for a few more of those sweet, sweet internet points. I got the feeling that even if he wasn’t an active champion of cancel culture per se, he never had much of a problem with it either, so long as the mob never turned against him.

The big question is: can he ever recover from this? As a professional public figure and podcaster, it’s fairly important for him that the answer be a hopeful “yes”. One of the many problems with mob justice is that there’s no clear point as to when penance is done and the mob is appeased. Some of his previous affiliates (The Maximum Fun network; My Brother, My Brother, and Me) kowtowed and denounced him in no uncertain terms, possibly permanently. Others, like podcast co-host (Jeopardy’s) Ken Jennings, came to his support. Still others, like co-hosts Dan Benjamin or Merlin Mann, remained silent. It’s not clear if or when his projects will try to make a come back.

Out of curiosity, I Wayback Machine’d Road Work’s patreon and it’s still slightly up ($4,072) compared to its last snapshot in September 2020 ($3,757), which seems to suggest that although he angered thousands of vengeful Twitter users, he wasn’t dropped by too many people who were big enough fans to financially support his projects – maybe one positive sign in Roderick’s favor.

I’ll reiterate my usual thesis that Twitter is right up there with nuclear weapons and environmental pollution as human-created technology that’s most existentially dangerous to civilization. It shoehorns complex, nuanced ideas into tiny, bite-sized chunks floated out into a cold, context-free environment, and is just irresistible for today’s brand of dopamine-driven armchair pseudo-intellectual as a venue to fight people on the internet, making them feel like they’re effecting important social change, while actually making everything much worse. We gain doomscrolling as a hobby, at the mere cost of everyone on Earth hating each other. Use at your own peril.