The subject of safety razors recently came up with a friend, and I was amazed by how negatively they seem to be viewed in some circles. He saw them as the macho hobby of “manly men” that was at best a romanticization of a bygone era, and at worse some kind of masochistic obsession. I’ve been an exclusive user of safety razors for a year now, and can confidently say that nothing is further from the truth. I wanted to do a write-up to correct a few misconceptions, and try to sell the idea a bit. 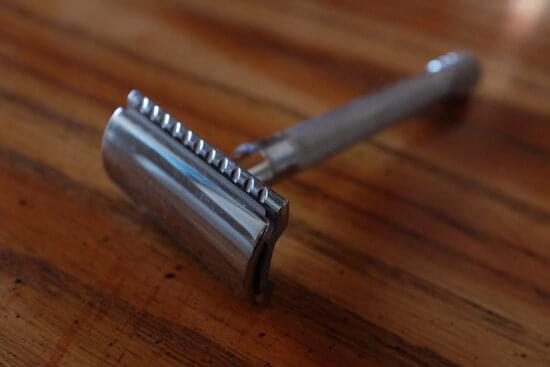 Why you should try it

The safety razor has some major advantages over your everyday supermarket brand:

By far the strongest argument for safety razors is the economy. I replace my blade once a week, so a $12 50-pack of feather blades lasts me a whole year. I’m getting a great shave that entire time instead of pushing my blades to the absolute limit because I’m afraid of the cost of refill cartridges.

A common misconception is that safety razors are dangerous, which probably stems from a confusion between a straight razor and a safety razor. The word “safety” in the name isn’t a misnomer; just like on more conventional modern razors, the handle of a safety razor is engineered with a protective bar that mimimizes accidental cuts. That’s not to say that they’re impossible, but new users will probably find that by far the most common cuts from a safety razor are the ones caused by blades that are sharper than they’re used to because of more aggressive replacement schedule.

Another perceived problem is a high barrier to entry. I’d recommend watching a YouTube video to get a feel for it, but it’s really no more difficult of a skill than normal shaving (not the case for straight razors, but that’s a different story). The one additional thing I’d recommend is a more thorough moisturization process to avoid cuts on the sensitive skin of the lower neck (in my experience it’s best to shave right after a shower in a humid room), but that’s really the only catch.

I have a very basic kit that includes these products:

The total cost of the kit is ~$70, but the only item in it that will need to be refreshed on any sort of schedule is the shaving cream. The handle and brush will last effectively forever and the blades and after-shave will need only infrequent replacement.

Overall, the capital cost of the hobby is slightly higher than a traditional shave, and its day-to-day practice requires a little more attention to detail, but it produces first rate results, and is very much a rewarding experience. If you’re tired of annual shaving gimmicks and new blades being priced like some kind of luxury item, it might just be for you.