I wrote about WGT for the first time last year, and this year I once again attended the world famous gothic event over in Leipzig. As usual, it was an incredible experience and I’m happy to say that I was finally starting to catch on to how the festival is organized and how to find things this year (as opposed to previous years which largely involved being led around by the hand in a state of perpetual confusion).

This article is more like a blow-by-blow dump to help persist some of the facts that I’ll inevitably forget later. I’ll try to do a more refined pass after taking some more time to reflect on it.

We started out ferrying to and from Agra to collect some festival tickets that had mistakenly been bounced from their destination address.

Afterwards we headed up to Bayerischer Bahnhof (an old train station that’s now a brewery) to attend the Sadgoth “Americans in Leipzig” meetup where we had a nice conversation with a local who was able to write in ancient Egyptian hieroglyphs (I think she had a masters in Egyptology; I asked whether she had a whip and fedora back home).

Afterwards it was time for Sixtina, the local absintherie. It was quite busy this year, but still a very cool place. The experience was also improved because we were now familiar with the traditional ritual for drinking absinthe (thank-you Wikipedia!), and were easily able to find somebody who owned a lighter. Afterwards we hopped Moritzbastei, the fortress turned bar and concert venue in the middle of town, and then over to another late night bar (“Flowerpower”?).

Unfortunately on Friday I made every time management mistake that can be made:

Next year I need to find a bike.

I’ve been listening to this Austrian duo for so long that not stopping to see them live would have seemed wrong. It was a good show, but slightly tarnished by the very large and somewhat impersonal venue which is the Agra main stage.

The multitude of timing problems listed above conspired so that I only caught the last five minutes of this act. It looked like it had been good though.

A good show up at Altes Landratsamt, which is a conveniently located, but slightly uninteresting venue. Very nice guitar work.

This Italian band (founded 1979!) had an incredible turnout and brought along a variety of interesting performers. It took place at the Volkspalast, a venue distinctive for it huge circular central stage.

This is the ballroom costume party that really sold me the first year I went to WGT. This year it migrated from a mitte location called Städtisches Kaufhaus over to Stadtbad, which I gather was an old pool. The costumes were just as good this year, but unfortunately the change in venue seems to have lost it some of the ambience and personality that made it truly incredible.

Having achieved a more reasonable return time of 3 o’clock the previous night, I was able to get a good start on the day at around 8 AM. This allowed me to get in a bit of photo walk before the crowds descended on the Leipzig city center, and a hearty meal in at Alex, which is fast becoming my favorite German breakfast buffet.

After planning out the day’s itinerary, I jumped on the 11 down to Agra and entered Heidnisches Dorf, WGT’s pagan village. If you’re not from Germany, this is really something to see, complete with pigs roasting on spits, blacksmiths doing metalwork, swordplay, archery and axe-throwing lessons, all the mead that you can drink, and a medieval barber. It’s also well-known for hosting one of WGT’s stages, which specializes in any genre that involves bag pipes (e.g. pagan rock).

A very energetic celtic rock band that played a good mix of original work and covers. These guys did a great job of getting the crowd energized, finishing off with a “red rover” style mosh pit activity.

Another folk rock band that did some amazing work on the drums, bag pipes, and a few other instruments that I didn’t recognize.

A self-described “epic folk” band from the Netherlands. Every part of their performance was great, but in particular the vocals were very beautiful. They also did a nice job of describing some of the backstory and themes behind their songs (which seemed to be rooted in various Scandinavian myths).

Possibly the most photo-perfect folk band that I’ve ever seen, this Dutch band had some incredible stage presence and worked in instruments like the harp. Midway through, they pulled in a guest dancer to further augment the performance. 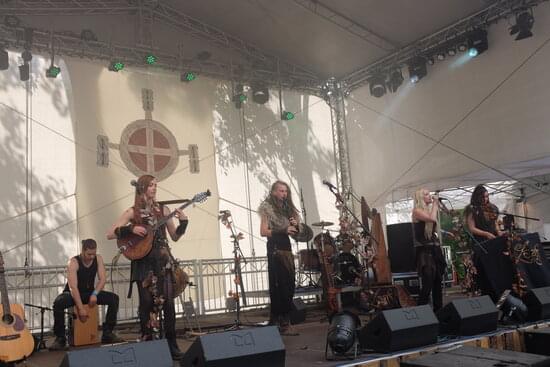 For a bit of a change of pace I moved over to the Schauspielhaus, and old theater closer to the center of town. This venue is somewhat distinctive in that the attendees actually take seats to view the performances there. The acoustics are also about an order of magnitude better than any other venue and it really shows. My first show there this year was a very nice gothic metal performance by Ashes You Leave.

The genre describing Evi is “melancholia”, which says about everything that needs to be said. A series of slow (and very said) songs that you just wish would never come to an end.

Back over to Altes Landratsamt, my final live performance of the day was by the London-based band Sol Invictus, who are characterized by their great instrumental rhythms and very slow and steady vocals. This isn’t exactly the type of show to get the crowd roiling, but a very good one nonetheless.

After the show, I went back to the hotel, and hung out in the hotel bar for a few minutes while writing down a few thoughts about the festival. I then promptly fell asleep.

I managed to get up early once again and did a little exploring around Leipzig coupled with a very drawn out breakfast at the fancy hotel’s very fancy breakfast buffet.

Only caught the last five minutes of this act down in the pagan village after spending about two hours dragging a traveling companion out of bed and down the tram line. Lots of folk instruments and big gypsy dresses.

These guys came on again, and the show was so good that I stayed again.

Headed back north to the Schauspielhaus to catch Jo Quail, a cellist and impressive loop performer. I didn’t know much about her previously, but this turned out to be one of my favorite performance of the show and possibly the most evocative live performance that I’ve ever seen.

Jo uses an electric cello combined with a loop machine to slowly build up every song to the point where it’s a powerful crescendo of sound and emotion. It’s the kind of thing that so hypnotizes you that you feel a chill running down your spine as you sit enraptured by the music. You just want the moment to hold still forever. The perfect acoustics of the Schauspielhaus didn’t hurt either. 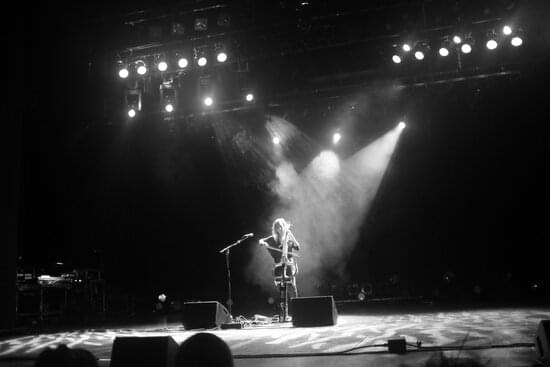 A trio that played some dark electronic music; the band name is so overloaded that I wasn’t really able to look them up. Their set was interesting, but they were up after a very difficult act to follow.

The Schauspielhaus is kept pitch black during performances and it’s easy to start nodding off as you get into the later night performances, so I decided to try a change of pace.

That change of pace was an old hall called Felsenkeller which was doing a running theme of black metal that night. It’s not really my thing, but the Swedish band Dark Funeral put on a very energetic performance that was fun to experience.

This Norwegian band followed up the swedes before them with a similar theme. Once again, quite a solid show.

My early morning schedule then caught up with me. I passed out at the hotel around two o’clock when I got back.

I woke up early again and set out on foot around the city only to find that even less was open than usual because of an inconveniently placed country-wide holiday. I managed to find a bakery that may have been the only business whose windows weren’t shuttered, and which quite possibly saved me from complete starvation.

Every year WGT holds a “Musik Kammer” in an old stock exchange building downtown called “Alte Handelsbörse” that puts on a variety of acts in classical music. This year there was a youth show put on down at a local institute called Lyzeum für Klavier. Great performances all around, and watching a ten year old wow the room on a cello definitely put my own struggles learning the (fretted) guitar into perspective.

As the pagan village is one of the few places that gets shows started early, I went back down there and caught the full Skaluna act this time. Excellent show.

Because this was the final day of the festival, I swung by the central location Agra (located a block from the pagan village) to do a full pass on the various shops and galleries that they have on display there.

A German folk band called Reliquiae was up next, and we got yet another well-executed and very energetic performance at Heidnisches Dorf. As I was leaving, they were covering Seven Nation Army. These guys don’t seem to have much of a presence outside of Germany, but I’ll be following along with them however I can.

After a quick stopover at the hotel to visit the steam room (and coming to the realization that my roommate was still in bed past 5 PM), I headed over to Kohlrabizirkus to catch Arkona. This venue is actually just an old wholesale marketplace building, but it looks like it’s a dilapidated nuclear reactor. The interior is epic in size and scale: only a single dome (of the two) is used for a show, and only a small part of one at that (the rest being curtained and fenced off), and it’s still large enough to hold the crowds drawn by the largest visiting bands easily.

As usual, Arkona totally stole the show with some incredible music and energy on stage.

Nice performance. I liked how they went into describing some backstory for their various pieces.

Another good performance. As they were playing about a thousand more people were funneling in through the doors in anticipation of Eluveitie.

Finally the main act. This was my first time attending an Eluveitie show live, and I was blown away by the kind of attendance they drew (and keep in mind, there’s a lot of heavy competition like Combichrist in the same timeslot).

As expected, this was a very powerful show which included the large repertoire of songs and folk instruments. At one point, they artificially induced a mosh pit of massive proportion (these seem to manifest organically with surprisingly low frequency in Germany). Like on their live album, they tried to pull in some crowd participation singing the chorus of Inis Mona, but just like in the live album, very few people actually knew the words to the song (“I close my eyes, Inis Mona / And reminisce of those palmy days / I moon o’er you, Inis Mona / As long as I breathe / I’ll call you my home”). It was an amazing show and the crowd loved it.

I got off to another early start and luckily a few things were open today so I was able to easily procure some breakfast. I’m currently typing this from the lounge area of my hotel, and plan to go check out the big goth store EMP in a few minutes, followed by maybe taking a look at some Nomos watches (when in Germany, right?). It’s very sad that attendees are once again funneling out of the city, but I’m already looking forward to 2016.