I recently moved my media backups over to a Ruby script that wraps rclone’s sync command. The script partitions rclone invocations onto different threads by media type so that small files like photos are synced frequently and not blocked by uploads of larger and less important files like videos. It all gets sent up to Amazon Cloud Drive, which seems to me to be the best deal out there at $60/year for unlimited space.

It was all working beautifully until a day after putting it in place, I tried to SSH back into my home machine and, to my chagrin, got back an error message telling me that it was unable to start a shell.

Historically these types of failures are usually because OS X is a bad operating system for a headless box, so my first assumption was that some system-level task had kicked in and rebooted my computer. Either that, or an errant web browser had eaten the entirety of its memory. The problem’s timing was a little too suspicious though, so I inspected my (identical) locally running backup script to make sure that nothing was amiss.

Well, something was amiss. In the few hours that it’d been running, the program had accumulated dozens of zombified rclone child processes. This was almost certainly happening on my home machine too, and it couldn’t give me a shell because every available file descriptor had been devoured by Ruby to communicate with its zombies. 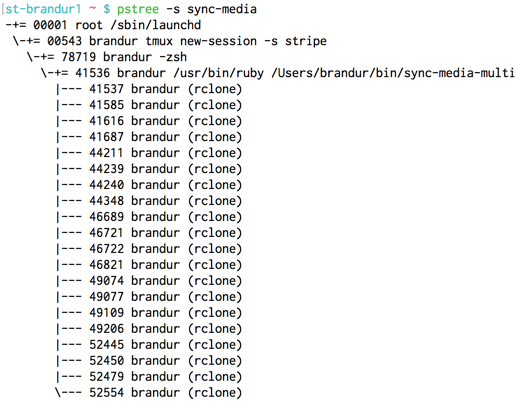 So what went wrong? I eyeballed my code and looked at the line where I was shelling out to rclone. I’m using Ruby’s IO.popen to get better control over the I/O coming out of the process. By default, it’ll give you an IO object which you’re responsible for closing, but it also comes with a safer block syntax which handles cleanup automatically. I’d intended to use the latter. Here’s what the call looked like:

See it? I’d accidentally included an each invocation and was passing my block to that instead. And just my luck, the IO instance returned by popen includes Enumerable so Ruby’s duck typing makes each a perfectly valid call. After being iterated, the object was being silently discarded and its resources were left dangling.

This one simple mistake means that my home server is now out of commission for two weeks until I can get back there to manually reboot it. This is one of about a thousand different reasons as to why I’m very keen on Rust these days.