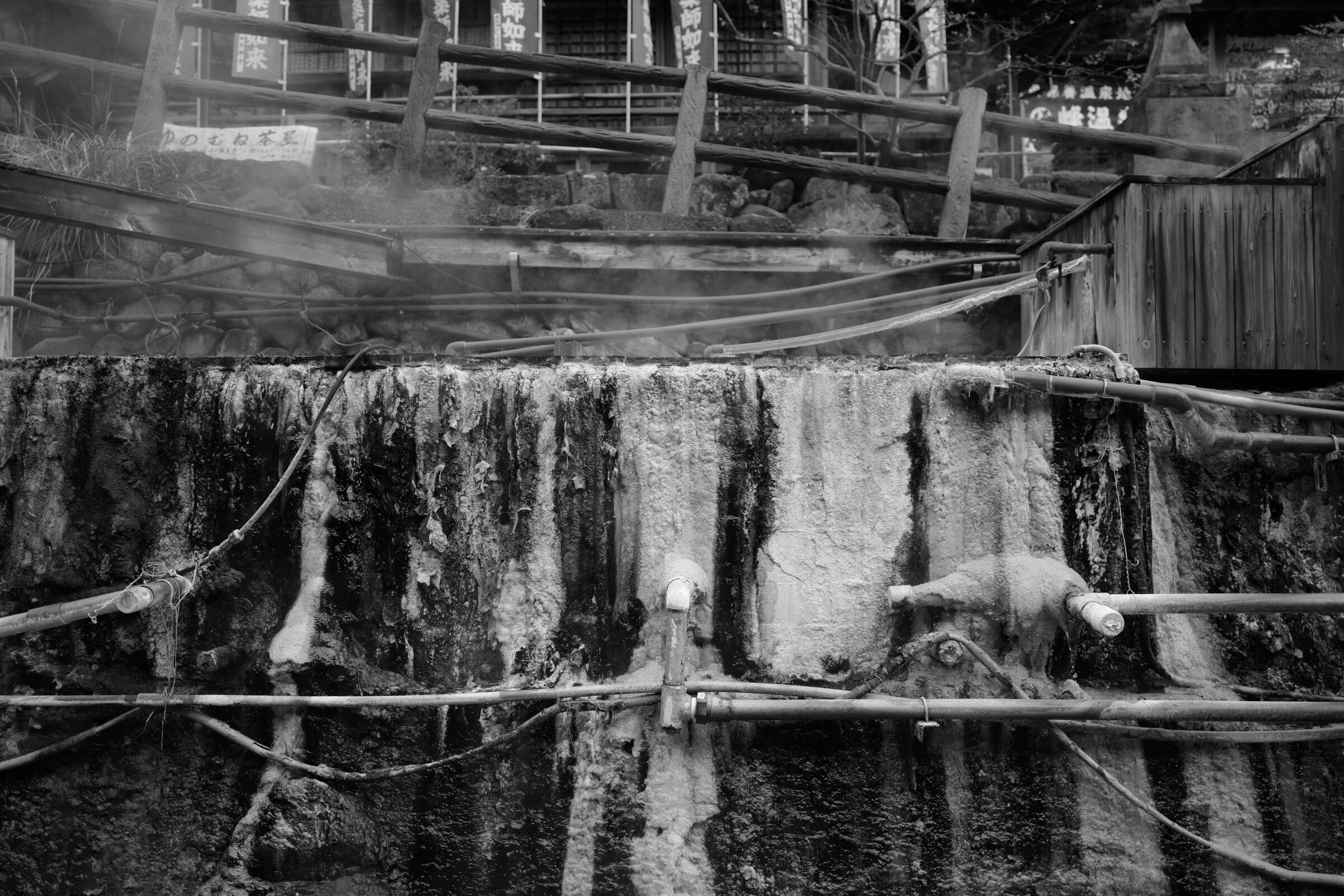 A few weeks back, looking at some photos of old vacations, and feeling a little nostalgic, I started looking up some old blogs written by friends years ago as they were making their own journeys around the world.

I was disappointed to find every one of them, without exception, now gone. The vanishings were for different reasons – a defunct blogging service, a deleted account, or an expired domain – but the result was the same. Entropy had taken its merciless toll, and these bright sparks of history were now scrubbed from time.

The Internet Archive’s Wayback Machine had saved some of them from total extinction, but only for those whose URL I could remember, and even for those, there were many holes – scattered pages and many images that their crawler hadn’t indexed or decided not to save.

There’s an argument to be made that it’s okay to let these old things go. Content is created, gets a brief moment to shine, and is forgotten, leaving vacuum for something new. There is something special about the ephemeral – in some ways we value something more knowing that it’s not going to last, but I still find it unsatisfying. In very few of these cases was the impermanence a conscious choice, and moreover, and many of these blogs are well representative of the pioneering days of the internet, and historically interesting, especially as we continue our unstoppable trajectory towards the entire world’s content slurped up into a few colossal platforms.

I’m Brandur, this is Nanoglyph, a newsletter about program longevity and hot springs. As usual, if you’re tired of all this blather, you can always unsubscribe in one simple click.

One of the most inspirational ideas to come out of old world Heroku was erosion resistance.

At the time, in a pre-container, pre-serverless world, it was a common occurrence to lose applications as something failed in one of their supporting layers:

Heroku’s erosion resistance suggests solving the problem by minimizing the surface area of the contract between application and host, and making it explicit. The smaller interface allows the underlying system to be changed and upgraded while keeping it compatible with existing applications. OSes would stay up-to-date with important upgrades and security patches, and applications would stay runnable even if left unchanged for years.

Time would show that the original idea of erosion resistance was a little on the optimistic side. Heroku’s first cedar stack would eventually require an upgrade to cedar-14, and that was subsequently replaced by more regular stack upgrades in the form of heroku-16, heroku-18, and heroku-20 1, each one requiring some user intervention as slugs tended to be tied to system dependencies in subtle ways, but it’s still turned out to be one of the stickiest ideas of the cloud age, with the core philosophy being subsequently baked deep into Docker and container images, now a keystone of all cloud infrastructure.

Erosion resistance also applies beyond apps, and a principle that we should make an effort to apply when building anything. With every new product or project, we should be asking ourselves: how can I choose a programming language, tech stack, and database (or lack thereof) that maximizes the chances that what I’m building will be around ten years from now?

It’s a big question, and there are many answers. Here are few ideas specifically for how to write in a way that resists time and entropy.

I argued in a blog post a few weeks ago that whatever you choose as your blogging frontend, make sure that the sources are available in a simple, widely interoperable format like Markdown, and stored portably in a system like Git. Even after the domain hosting this newsletter is long gone, its sources should still be available on GitHub, and even if GitHub is gone by then, the source repository could easily be moved to somewhere else. I hope that it’ll be readable decades from now.

Contrast this to a dynamite site which stores sources in a database that needs frequent upgrades to stay healthy, and renders with a dynamic language with hundreds of dependencies and whose ever-shifting ecosystem demands full time attention just to keep up. A decade on, it’s likely that the frozen-in-amber HTML snapshots from archive.org will be all that’s left. 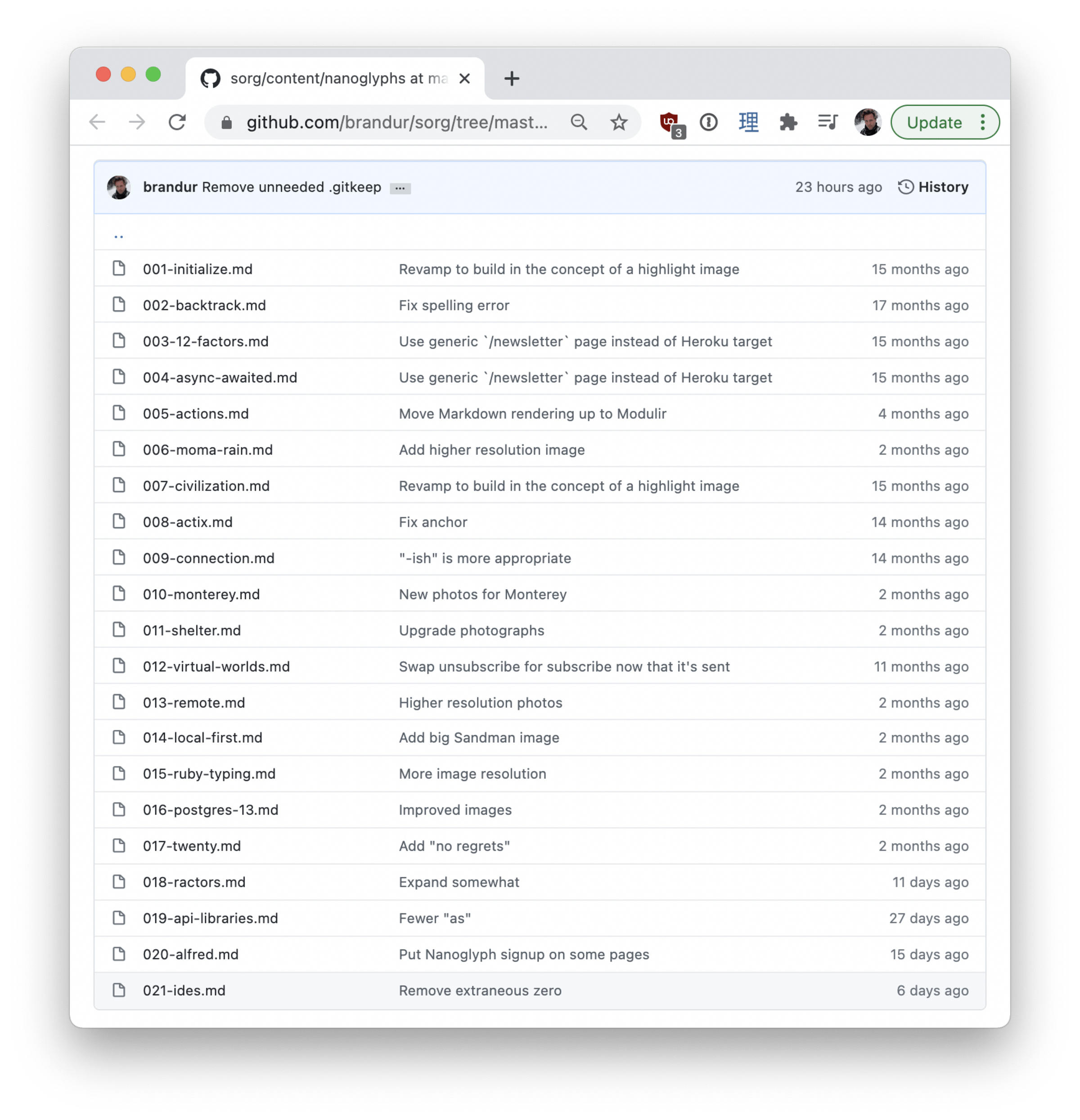 About ten years ago, a novel new writing platform called Medium experienced a sudden surge in popularity. With beautiful content layouts, network effects, and a powerful editor, it was especially popular amongst the tech community, who hurriedly abandoned personal blogs to rush to it in droves.

And for many years, it was respectable to write on Medium, but right from the beginning there was always a problem. This was an investor-bootstrapped company employing many highly-priced software engineers and operating in the world’s most expensive city. And even with occasional surges in traffic, blogging isn’t traditionally known as a highly lucrative market. These two forces were fundamentally at odds with one another, and over the years Medium degraded in pursuit of a business model – first with little nag messages and ads, and later with full-screen modals and paywalls. They’d taken their users’ content and held it hostage, but they owned the platform and were within their rights to do so.

These days, to most of us in tech circles, it seems like the height ill-advised hubris to put new content on Medium, but it was different in those early days. It was a great platform at the time, and people were optimistic that it would only get better.

Here’s your second idea for entropy resistant writing: think on business models. The exact extent to which Medium went bad may not have been foreseeable, but the fact that there was a strong chance it’d get worse absolutely was. The same was true for a lot of the traditional power platforms like Tumblr, Flickr, Blogger, and even as far back as Geocities. Although they’ve all survived in some form through to today, your content on those services was always at risk.

This is one reason that I’m not quite as enthusiastic as most when it comes to internet’s current golden child, Substack. I love newsletters, love reading good writing, and as I wrote last week, wish only the best for them and that they’ll put a dent in our increasingly cynical media institutions, but at the end of the day, sending email isn’t cheap. At least Substack has a business model and there’s no question that they’re doing well off their top writers, but there is a question as to what the platform looks like over the long term, especially for long tail users. There’s a non-zero chance of a Medium repeat.

Years ago, some old colleagues from Calgary were about to quit their jobs and embark on a multi-year voyage to travel the world. They wanted to keep a record of it, and asked me what blogging platform to use.

To my everlasting chagrin, my short-sighted younger self told them to try Posterous, the writing product du jour, whose differentiating feature was being able to write posts from your inbox, and publish them by email (which ironically, is an idea that’s just come back for a second round). Of course, a few years later, Posterous was acquired by Twitter and shuttered shortly thereafter.

But I got lucky, and my bad suggestion accidentally became a good suggestion. The founders of Posterous felt strongly about keeping their users’ content online, so created a new extra-Twitter initiative, aptly named Posthaven. From Posthaven’s pledge:

Need a blog? So did we. This one is made to last forever.

We need a good solid blog platform for ourselves, and we know our friends and colleagues need one too. That’s why we started Posthaven.

We’re not going to show ads. We’re not looking for investors. We’re going to make money the best way we know how: charging for it.

It is a simple, clean, well-lit place to keep your stuff.

Posthaven charges $5/month, which is more money than most people are used to paying for hosting text content, but their payment model has an interesting twist: after you’ve been paying for the service for a year, they’ll keep your existing content around forever, even if you stop paying.

They provided an easy route for evacuating content off the sinking ship that was Posterous, and because of that, my friends’ blog is still online to this day, unlike many of its contemporaries. (See Beyond the Maple Tree.)

Posthaven is still a very small team, so it remains to be seen how long their promise of forever will be able to last, but I hope they make it decades.

One TLD, as generic as possible

A common reason for old sites to fall offline is that even if content still has a home, their owner stops paying for the domain name. At around $10/yr 2, domains aren’t that expensive, but they’re still a non-trivial cost over many years, especially when people own more than one. At some point they’re just not worth the upkeep.

Here’s a really simple idea for erosion resistance: don’t buy a TLD for every new project. Get one top-level domain that’s generic sounding and which you’re reasonably happy with, and then nest future projects as subdomains under it. Subdomains are free, so instead of paying for five domains forever, you’re just paying for one that hosts five projects.

I blog under my own name at brandur.org, which works well enough for personal use, but putting subdomains under it that aren’t directly related to me would be strange. As a contrasting example, I have an ex-colleague that blogged at xph.us, a domain that’s short and not particularly suggestive of anything. You could nest anything under that and no one would blink an eye.

Distributed systems are more robust. A common refrain these days is that if you want information to be durable and last, put it on a blockchain. (I’m not so sure about that one myself, but you do hear it a lot.)

Here’s one last idea for a dark form of erosion resistance: write a newsletter. Even if the original content disappears from the web, there’s a reasonable chance that it’s fully recoverable as someone out there still has a copy of it in their mailbox.

I’m obsessive about annotating and archiving the newsletters I receive (each is sorted by rule into its own dedicated label), so if my friends’ disappeared blogs that I mentioned at the beginning had been newsletter instead of blogs, I’d still have every word of them.

This is a “dark” form of persistence because it brings the content out of the public sphere, but it’s not bad as a last resort. 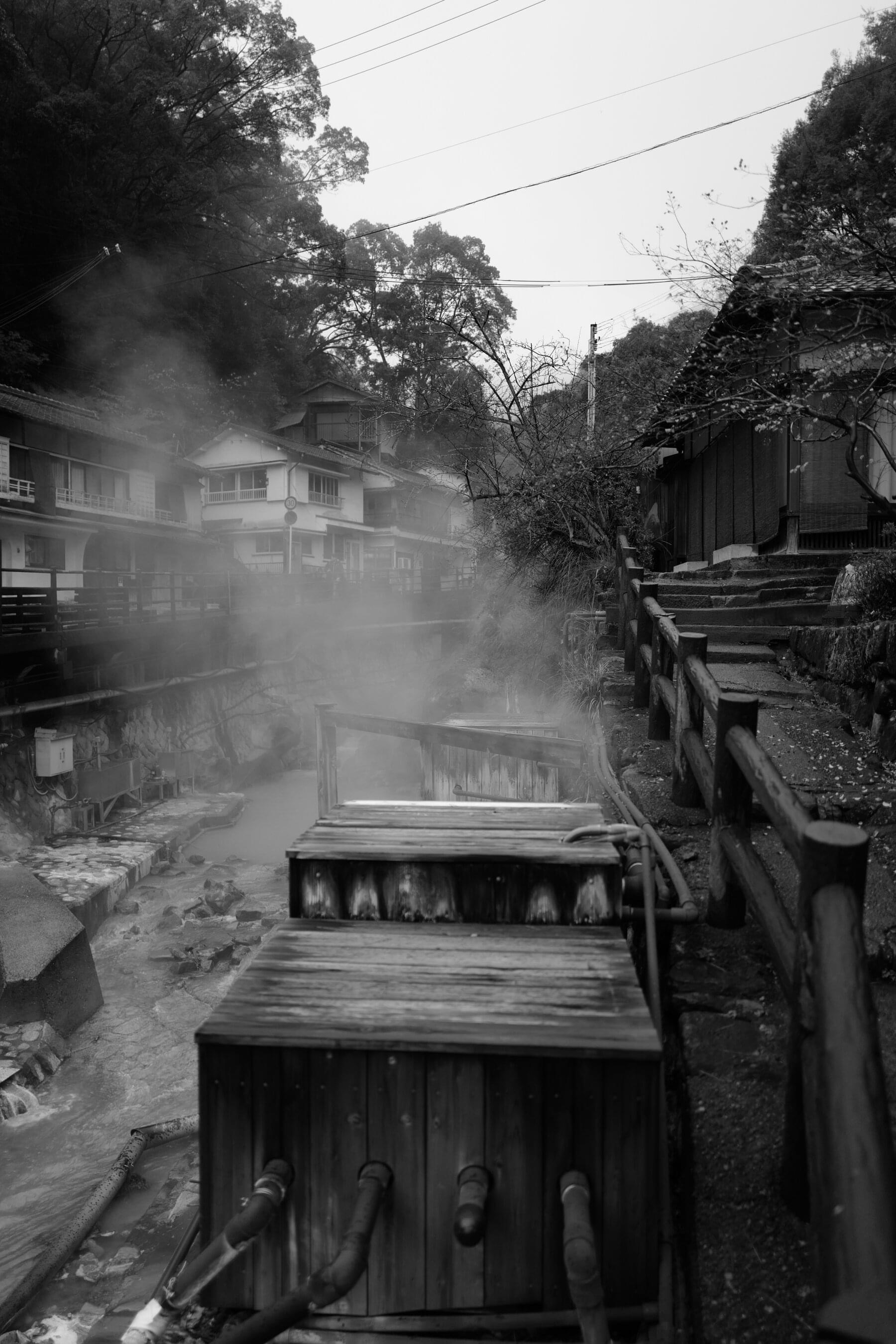 Today’s photos come from a trip to Japan a few years back where one of the places we visited along the Kumano Kodo was Yunomine Onsen, a tiny hot spring village.

I’ve already written about it in an old edition of Passages & Glass, but it’s been a good year to revisit old memories. Nestled around a steaming creek where locals go to slow-cook onsen eggs, the village features Japan’s oldest hot spring (discovered 1,800 years ago), and a tiny two-person bathhouse called Tsuboyu. Everything was covered with thick mineral buildups (see image at the top – I found some taps with inches worth of the stuff), which although is proximately an eyesore, was subtly beautiful in a profound, wabi-sabi sort of way. Easily one of the best trips of my life.

1 The numeral in a stack name like heroku-18 indicates the major version of Ubuntu it’s tied to.

2 Although fluctuating much higher for specialty domains.