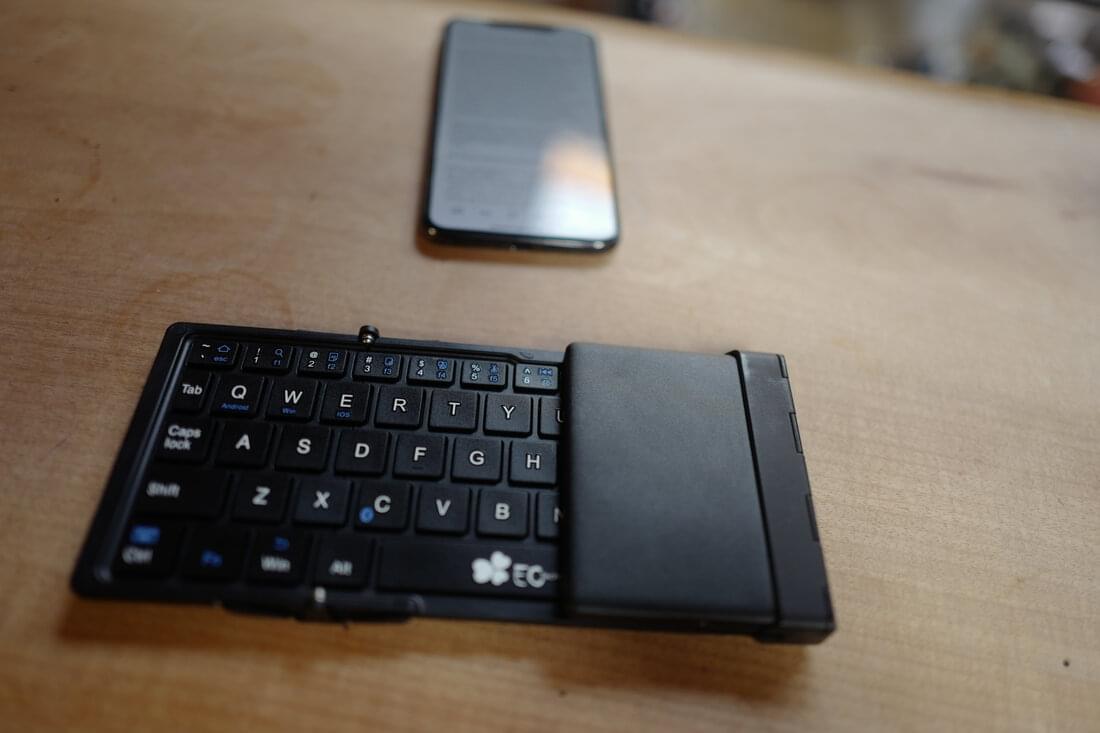 My writing habits have been somewhat frozen recently – not so much a writer’s block, but a problem whereby every attempt at a directed task on a computer morphs into something else – email, code review, Hacker News, YouTube. To thaw them, I’ve gone radical. I’m writing from an iPhone and folding Bluetooth keyboard (pictured above) under the theory that the glacial interaction speed of iOS will be conducive for some multitasking-free focus. When slow input (touch) and long animation makes the mobile equivalent of ⌘-Tab a 1-2 second operation, the platform, intentionally or not, inherently discourages the habit.

The keyboard has a solid feel and the world’s most satisfying folding mechanism, but between cramped keys, a random 10% a depressed button does nothing, and occasional repeats, every second word needs retyping. Navigating text takes so long that I stopped fixing typos. Write fast, fix later – I’ll get them on an edit pass, which is a good habit anyway. It has a few problems, and using it in public looks completely ridiculous, but most importantly: the improved focus is working.

Google put together a guide for how to apply 12-factor to its cloud platform, showing that despite the method’s age (2011; ancient by the standards of the fast moving discipline of computing), it’s proven itself to be one of the most sticky ideas in the age of cloud technology.

The guide suggests the use of many Google-specific products as answers to each factor, but that’s okay given that the glue keeping everything together is open. For example, although a Kubernetes ConfigMap is recommended for configuration, it still injects environmental variables, and that means that reuse or migration between Google’s managed Kubernetes and something else is not only possible, but quite approachable.

It’s easy to undervalue that. At Stripe we’re close to the opposite end of the spectrum in terms of generality, and everything from configuration to logging to booting a server requires infrastructure that’s been so heavily customized that it’d be useless outside of our unique Galapagos environment. It works, but any significant change starts at thousands of hours of engineering work, and goes up by orders of magnitude from there.

Spooky effects at a distance

Fixing getrandom() is a great piece that opens a tiny window onto the world of kernel development, and what’s inside is fascinating. The saga starts with the addition of getrandom() to the kernel after the LibreSSL project successfully advocated that it was too difficult to correctly procure secure entropy (where good security practice is difficult, insecurity is likely).

It worked well until a bug was reported whereby computers hang on boot which turned out to be caused by the X Window System blocking on a call to getrandom() because not enough entropy was available. That reduction turned out to be caused by an optimization in ext4 that minimized disk I/O on startup. Breaking changes don’t get much more roundabout than this — a bug-free optimization to a file system had the downstream effect of breaking boot for a graphical UI. You can’t help admire the intrepid bug hunter who figured that out.

A follow up of the last article (”Really fixing getrandom()”) goes into how the problem was eventually patched. A number of solutions were put forward, like making getrandom() block until it was able to return sufficient entropy, and/or having it return an error in case it couldn’t, but there were major concerns with each approach. Linus felt that blocking by default is wrong, and returning an error was akin to punting the problem downstream, where it wasn’t likely to be handled well.

The fix that was eventually committed falls back to “jitter” entropy in cases where not enough “normal” entropy is available. Jitter entropy relies on the fact that executing instructions on a modern CPU is sufficiently complex that the precise time it takes to do so is inherently unpredictable. Although not considered particularly good entropy, it doesn’t have any known flaws either, so it was enough as a fallback option for the kernel. It has a major advantage of being quite fast, so even in case a program has to block while jitter entropy is being generated, it won’t have to do so for long (~1s for 128 bits on a system with a 100 Hz tick).

I don’t review many things, but this week I wrote one for Apple’s new AirPods Pro. Usually, I can’t decide whether Apple’s direction these days is good or bad. The Touch Bar spells a clear “bad”, but some decisions, like their return to a scissor keyboard mechanism 1 in the new 16-inch MacBook Pro, are more positive. Most of what they do is grey: a welcome-until-you-see-the-price MacBook Air refresh, discontinuation of the single-port-but-otherwise-kind-of-amazing 12” MacBook, a new pro computer and monitor, but priced so far into the stratosphere 2 that you want eight figures of net worth before thinking about one.

AirPods are the one product line that’s been nothing but a shining light. Like the original iPhone, they were technology so refined that it wasn’t clear it was even within human reach until the day they were released. The first iteration was close to perfect but for poor sound isolation (useless on the street, public transport, etc.) and underwhelming “tap” interface. The Pros fix both those problems, and for my money, there’s never been a better pair of earphones.

I haven’t advertised this newsletter broadly, and while I’m experimenting with it, it has a circulation of roughly one person (me), but if you like prototypes, you can sign up for it early here. If I keep going, you’ll keep getting them. If I don’t, there shouldn’t be any ill effects.

1 And physical escape key! And T-shaped arrow keys! Apple’s been spoiling us recently with the reintroduction of 50 year old keyboard technology.

2 Starting at $6k and $5k for computer and monitor respectively, but for the bottom of the range configurations that no one is actually supposed to order, so expect to spend far more.